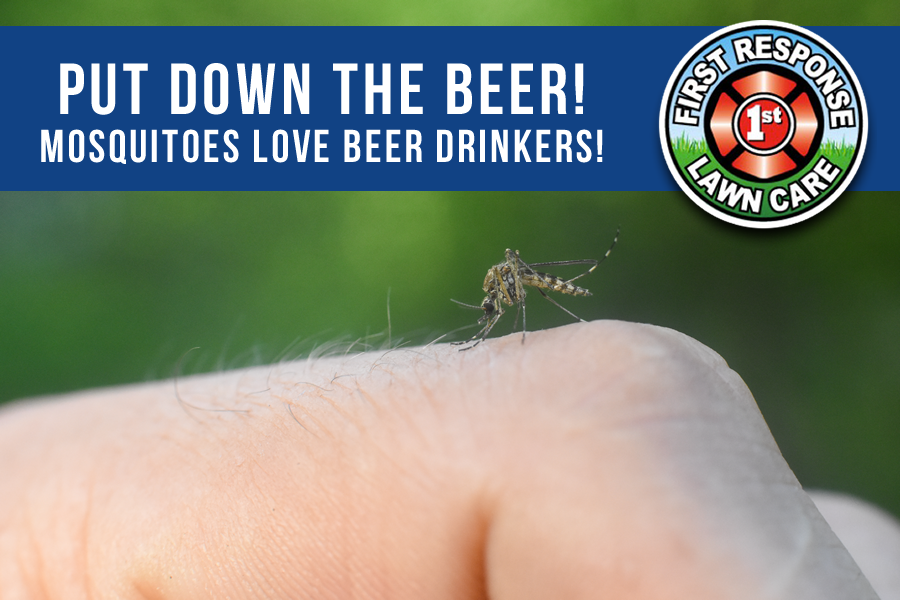 Mosquitoes are attracted to the carbon dioxide, lactic acid and octenol found in our breath and sweat. They may have a preference for beer drinkers!

Those pesky mosquitoes. Why do they love us so? They hover around our porches ready to take a bite from our face or, worse, follow us indoors where they can munch on us during our sleep. To add insult to injury, we’ve got to be concerned about the dreaded West Nile Virus, which adds a layer of worry on top of the itching. We thought we’d share these 14 facts about our pesky summer companions:

1 ) There are around 3,500 species of mosquitoes, but only a couple hundred feast on human blood.

2 ) If you’ve been bitten by a mosquito, it was a female. Male mosquitoes make do just fine with plants, but females need a blood meal before they can lay eggs.

3 ) The female’s saliva contains an anti-coagulant that lets her more easily suck up her meal. The saliva induces an allergic response from her victim’s immune system; that’s why your skin gets an itchy bump.

4 ) Females lay their eggs in shallow water or even damp soil that’s prone to flooding. Get rid of any standing water near your home to reduce the mosquito horde.

5 ) The best time to avoid mosquitoes is in the afternoon, when temperatures are hottest and the insects rest in cooler spots.

6 ) The Centers for Disease Control and Prevention lists only four chemicals as being effective for repelling mosquitoes: DEET, Picaridin, Oil of Lemon Eucalyptus (or its synthetic version, called PMD) and IR3535.

7 ) Mosquitoes are attracted to the carbon dioxide, lactic acid and octenol found in our breath and sweat, and they also sense the heat and humidity that surrounds our bodies. They may also have a preference for beer drinkers.

8 ) Some scientists think that eliminating mosquitoes wouldn’t be such a bad thing. Others aren’t so sure, though, and worry about the effects on the ecosystem of the loss of an insect that is eaten by spiders, salamanders, frogs, fish and other insects.

9 ) Malaria infects around 250 million people each year worldwide and kills about one million, mostly children in Africa. About a fifth of those deaths can be attributed to counterfeit anti-malarial drugs.

10 ) George and Martha Washington both suffered from malaria. George contracted the disease when he was a teenager. In the second year of his presidency, he experienced severe hearing loss due to quinine toxicity.

11 ) Insecticide-treated nets (ITNs) that hang over a bed have been shown to reduce malaria incidence among children and pregnant women by up to 50 percent. The nets last only a few years before they have to be replaced.

12 ) The last time there was an outbreak of yellow fever, another mosquito-borne illness, in the United States was in 1905 in New Orleans. At the time, the city was trying to prevent the disease by fumigating all the ships that entered the city. However, a smuggler’s ship full of bananas avoided the quarantine and by June cases began to emerge among Italian immigrants who unloaded banana boats.

14 ) The emergence of a worldwide outbreak of the mosquito-borne disease chikungunya can be traced to a 2004 drought in Kenya. The disease hasn’t made it to the United States yet, but scientists think that could occur at any time.

That about sums up what we learned from Sarah Zielinski, an award-winning science writer and editor. She is a contributing writer in science for Smithsonian.com and a lot smarter than we are.

So put the beers down and call First Response Lawn Care at (214) 701-7622 if you have any issues with mosquitoes dive bombing you while you’re trying to chill. Our Mosquito Abatement program can eradicate those pests and get you back to your beer drinking in no time!