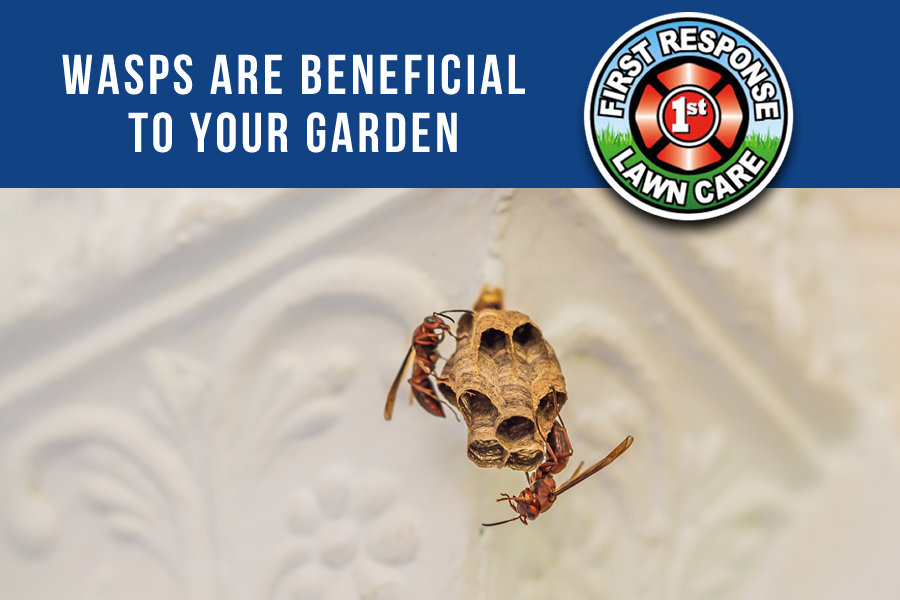 Are you seeing a lot of mud daubers (wasps) buzzing around your house this summer? With that comes a bunch of little mud homes they’ve built in brick grout, under eaves, etc. And usually it means you have an abundance of spider webs closeby. These insects do not generally sting people and are more of an annoyance than a risk, but read on beccause they do have some signfiicant benefits.

Mud daubers are solitary insects, meaning each nest only has one wasp that is responsible for all the necessary tasks.  The nests are constructed from mud by a single mated female and they can vary in shape, from pipe-shaped to globular.  These nests can be found in any protected such as area under eaves, in garages, and the like.

Mud dauber is a common name given to a number of wasps that build their nest from mud. Also called “dirt dauber,” “dirt dobber” or “mud wasp”.

Good question. The nest of the black and yellow mud dauber is a simple, one-cell, urn-shaped nest that is attached to crevices, cracks and corners. Each nest contains one egg. Usually several nests are clumped together and covered in mud.

How can you tell a mud dauber from another wasp?

Adult mud daubers are three-quarters of an inch to 1 inch in length and, depending on the species, vary in color from dull black to black with bright yellow markings to iridescent blue black. The feature that best identifies the mud dauber is its long, narrow waist — the section between the thorax and abdomen.

What do mud daubers eat?

Mud daubers are solitary insects and like most wasps, they are predators. They sting their prey with paralyzing venom. The venom does not kill, but paralyzes and preserves the prey so it can be transported and stored in the nest cell as food for the larva. Although the black widow spider is the preferred food, the mud dauber also will dine on flies, crickets and leaf hoppers, with some flower nectar and pollen for dessert.

Two species generally found in Texas are the black and yellow mud dauber and the metallic blue mud dauber. Both are predators, but each function in different ways. These two species may occupy the same sites year after year, creating a large number of nests. These nests can last many years in a protected area and are often used as nest areas by other kinds of wasps and bees, and sometimes other types of insects.

The black and yellow mud dauber will prey on small, colorful spiders, like the crab spider, orb weavers and some jumping spiders. These are usually found around vegetation. The black and yellow mud daubers build simple, one-cell, urn-shaped nest of mud, attaching it to crevices, cracks, and corners of buildings. The nest is composed of a series of cylindrical cells that are plastered over to form a smooth nest almost the size of a lemon. Each cell will contain only one egg.

The metallic-blue mud dauber is one lazy wasp. Instead of building their own nest, they use abandoned nest of other species, usually old nests of the black and yellow mud dauber. They carry water to the abandoned nest and recondition it for their own purposes. The blue mud dauber is the main predator of the black widow spider. They prefer the immature black widow spiders found in dry areas around outbuildings, rocky areas and stone piles.

Why are mud daubers beneficial to my yard?

Mud daubers are considered extremely beneficial insects. They keep the spider population in check. Mud daubers are wasps and even though they can sting, they don’t generally sting people. Most wasp stings happen when people get too close to the nests of the more aggressive social wasps, like the hornet or yellow jacket. The solitary mud dauber does not defend its nest as aggressively as the social wasps and is very unlikely to sting even when provoked. However, you might get stung if you attempt to handle them.

If you just don’t give a hoot about the benefit of the mud dauber and want to get rid of the nests, call First Response Lawn Care at 214-701-7622. We offer a pest control program that will rid your yard of insects. We are licensed with the Texas Department of Agriculture License #450863. We can help!