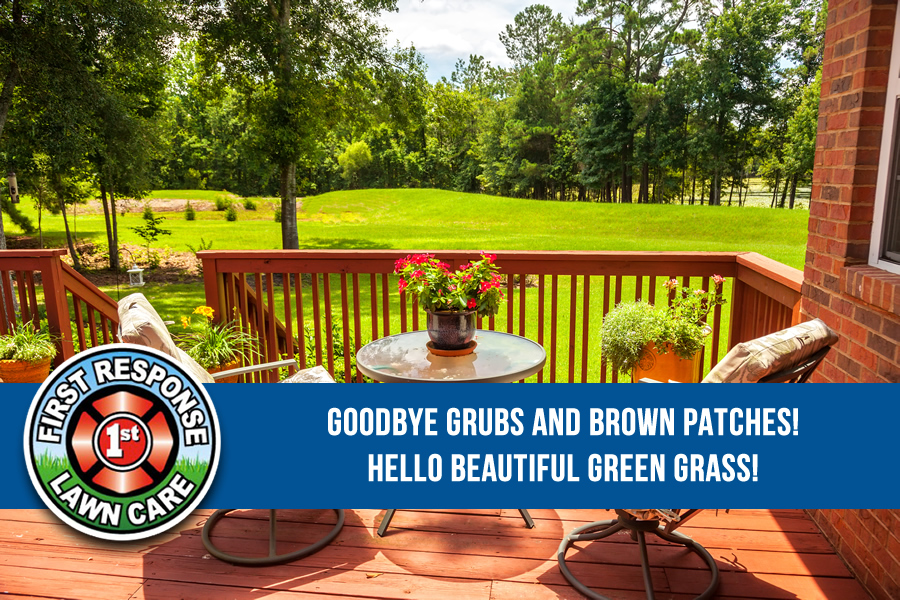 First Response Lawn care Rockwall has your perfect concoction of chemical treatments for your lawn. We use effective and safe methods to eliminate grubs through long-lasting formulations. Our goal is not only termination, but also lawn pest prevention.

Grub control products are best applied in July, so they can impact grubs as soon as they hatch.

If you saw brown, dying patches in your lawn this Spring, chances are that you had white grubs. The cure for moving forward with a green lawn is a late-summer treatment.

The best time to treat for grubs is actually late summer, when grubs are small and more susceptible to insecticides.

White grubs are the larval stage of May or June beetles and masked chafers. Grubs are white, C-shaped with distinct, brown heads and three pairs of legs near the front end. They feed on dead organic matter and grass and plant roots. These are considered bad “bugs” since they feed on plant roots.

Adult May or June beetles are oblong, robust insects. There are many species in Texas, but most are shiny, reddish brown or dark brown, and three-quarters to 1 1/4 inches long. They are often incorrectly referred to as “Junebugs.”

Adult masked chafers resemble May beetles but are smaller and yellow brown in color. The Japanese beetle is often confused with June beetles, but Oklahoma does not have them as other states do.

May/June beetles have life cycles ranging from 1 to 3 years, but most in this area have a two-year life cycle. From April to September adults begin to emerge from the soil. Adults of most species are most common in May and June. They mate and the female lays 50 eggs in the soil.

Larvae hatch three to four weeks after eggs have been laid and feed on dead organic matter, later moving to the roots of plants. They move deeper into the soil in fall for winter. The following spring the larvae move back to the root area to feed.

Bottom line is that nobody wants grubs in their lawn feeding on their grass. Call First Response Lawn Care today and let’s get started on a lawn treatment that will eradicate those suckers!