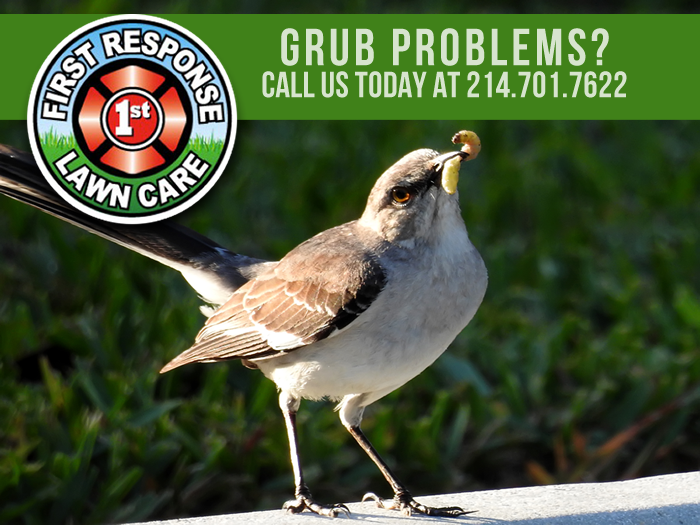 White lawn grubs are for the birds! These immature forms of different beetles, such as the Japanese beetles or June “bug” feed on grass roots (and the organic matter in the soil), causing sections of grass in the lawn to die.

Birds, skunks, armadillos, raccoons or moles will tear up your lawn to uncover and eat these grubs.

Grubs eventually turn into adult beetles and emerge from soil to mate and lay eggs, which hatch into more grubs. This typically happens in the summer months, so it is very important to get rid of the grubs before the life cycle starts. Most beetles have a one-year life cycle; June bugs have a three-year cycle. *GULP!* Generally adults emerge from soil, mate, and lay eggs over the course of two to three weeks in early to midsummer.

Depending on soil moisture and temperature, eggs hatch about two weeks after being laid, in mid- to late summer. The new generation of root-munching grubs begins feasting immediately after hatching.

How to tell if you have a grub issue –

Controlling grubs in your lawn is a very time sensitive activity. The window of time to treat your lawn for grubs is now through July 14th.

The treatment is not to kill current grubs, but rather kill the grubs that are going to hatch sometime in late July, August, or September.

You have to use the correct chemical to destroy the next round of grubs that will damage your lawn in fall and next spring. Call First Response Lawn Care today and ask about our grub fungicide treatment 214.701.7622!